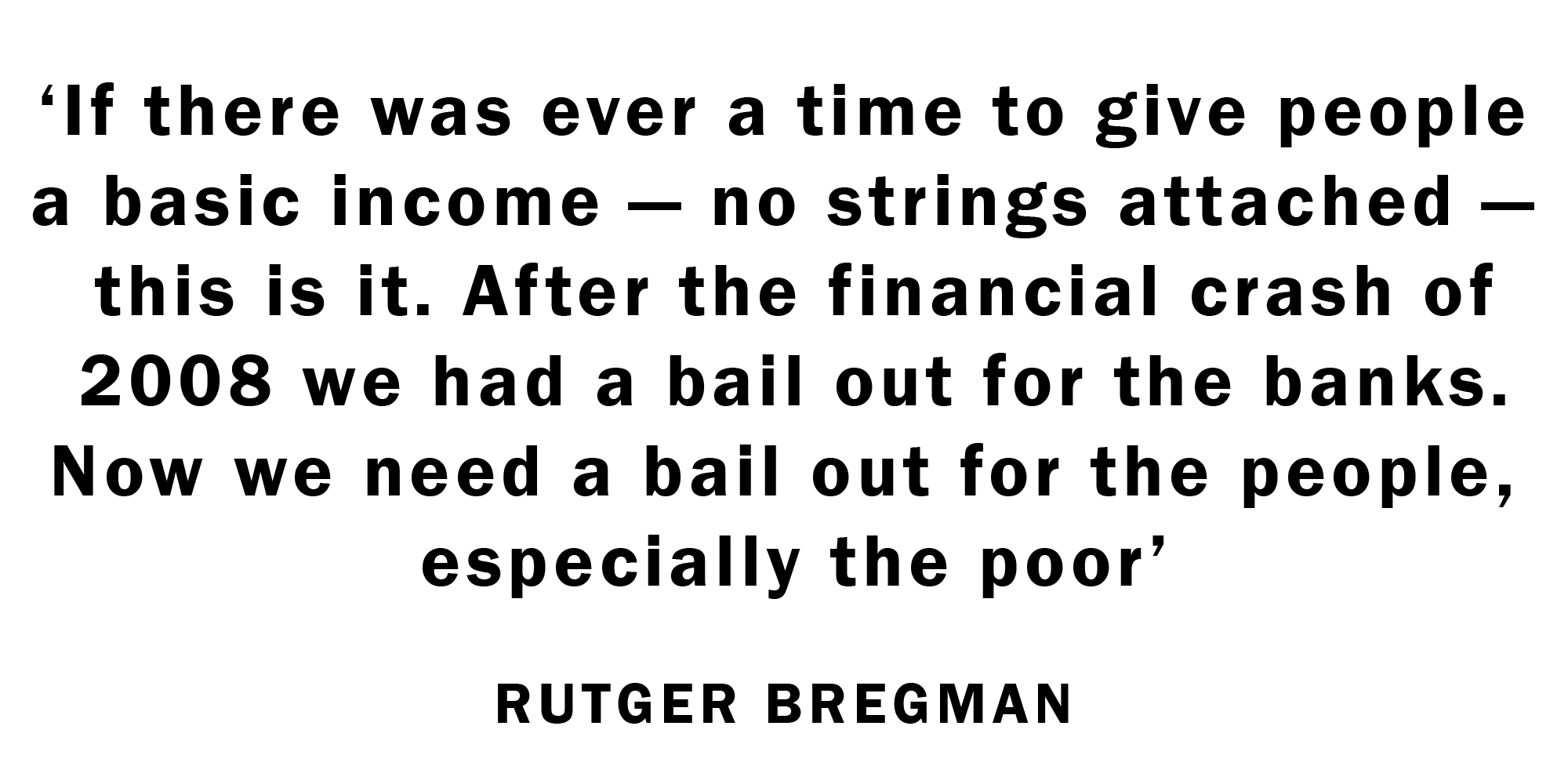 We need a new lode­star, a new map of the world that once again includes a distant, uncharted continent – “Utopia.” By this I don’t mean the rigid blueprints that utopian fanat­ics try to shove down our throats with their theo­cra­cies or their five-year plans – they only subordinate real people to fervent dreams. Consider this: The word utopia means both “good place” and “no place.” What we need are alternative horizons that spark the imagination. And I do mean horizons in the plural; conflict­ing utopias are the lifeblood of democracy, after all.

As always, our utopia will start small. The found­a­tions of what we today call civil­iz­a­tion were laid long ago by dreamers who marched to the beat of their own drum­mers. The Spanish monk Bartolomé de Las Casas (1484–1566) advoc­ated equal­ity between colon­ists and the native inhabitants of Latin America, and attemp­ted to found a colony in which every­one received a comfortable living. The factory owner Robert Owen (1771–1858) cham­pioned the emancipation of English workers and ran a success­ful cotton mill where employees were paid a fair wage and corporal punish­ment was prohib­ited. And the philo­sopher John Stuart Mill (1806–73) even believed that women and men were equals. (This might also have had some­thing to do with the fact that his wife composed half his oeuvre.)

One thing is certain, however: Without all those wide-eyed dreamers down through the ages, we would all still be poor, hungry, dirty, afraid, stupid, sick, and ugly. Without utopia, we are lost. Not that the present is bad; on the contrary. However, it is bleak, if we have no hope of anything better. “Man needs, for his happi­ness, not only the enjoyment of this or that, but hope and enter­prise and change,” the British philosopher Bertrand Russell once wrote. Elsewhere he continued, “It is not a finished Utopia that we ought to desire, but a world where imagination and hope are alive and active.”

London, May 2009 – An experiment is under way. Its subjects: thirteen homeless men. They are veterans of the street. Some have been sleeping on the cold pavement of the Square Mile, Europe’s financial center, for going on forty years. Between the police expenses, court costs, and social services, these thirteen troublemakers have racked up a bill estimated at £400,000 ($650,000) or more. Per year.

The strain on city services and local charities is too great for things to go on this way. So Broadway, a London-based aid organization, makes a radical decision: From now on, the city’s thirteen consummate drifters will be getting VIP treatment. It’s adiós to the daily helpings of food stamps, soup kitchens, and shelters. They’re getting a drastic and instantaneous bailout.

From now on, these rough sleepers will receive free money.

To be exact, they’re getting £3,000 in spending money, and they don’t have to do a thing in return. How they spend it is up to them. They can opt to make use of an advisor if they’d like – or not. There are no strings attached, no questions to trip them up.

The only thing they’re asked is: What do you think you need? 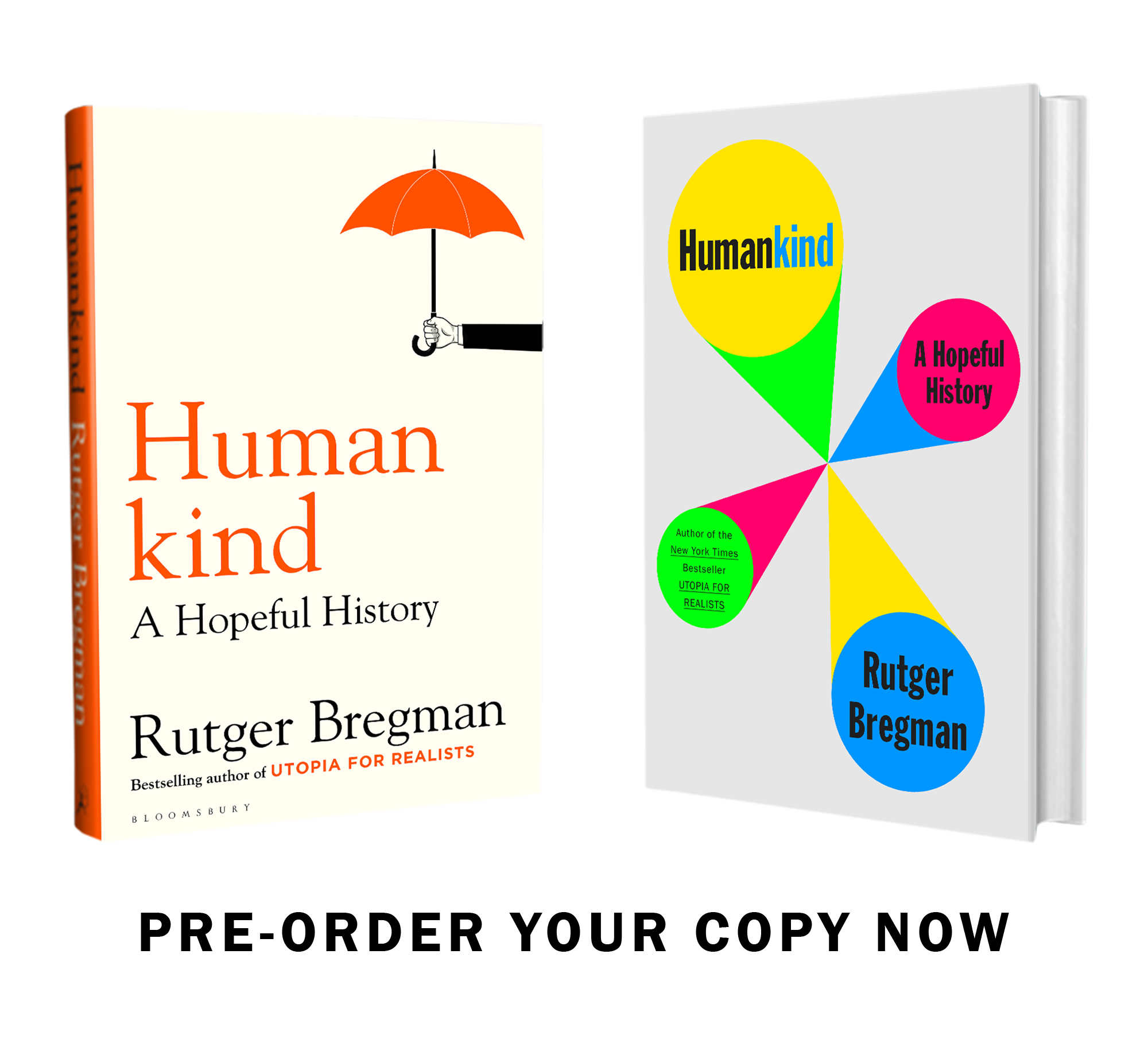 Put aside your newspaper for a while and read this book.

Humankind makes a new argument: that it is realistic, as well as revolutionary, to assume that people are good.

The instinct to cooperate rather than compete, trust rather than distrust, has an evolutionary basis going right back to the beginning of Homo sapiens. By thinking the worst of others, we bring out the worst in our politics and economics too.

In this major book, international-bestselling author Rutger Bregman takes some of the world's most famous studies and events and reframes them, providing a new perspective on the last 200,000 years of human history. From the real-life Lord of the Flies to the cooperation seen in the aftermath of the Blitz, the hidden flaws in the Stanford Prison Experiment to the true story of the Kitty Genovese murder, Bregman shows how believing in human kindness and altruism can be a new way to think - and act as the foundation for achieving true change in our society.

It is time for a new view of human nature. 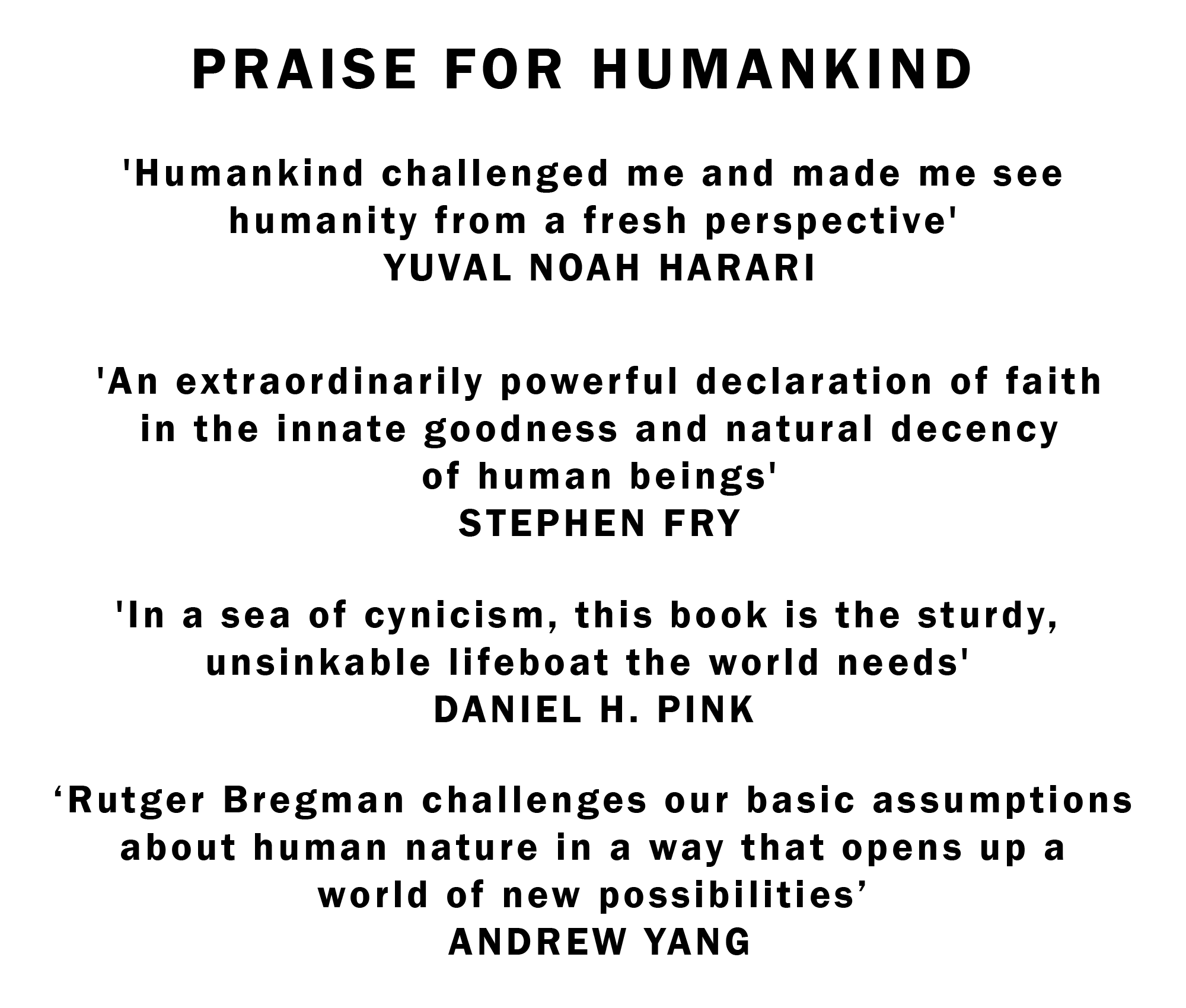