Sweepstakes Is Now Over.

*NO PURCHASE NECESSARY. See full sweepstakes rules for further details. There is a total of $33,000 in cash and prizes to be won. Six (6) Entries total will be randomly selected (3 Regions Across Canada). Online Sweepstakes starts on or about October 21, 2021 and ends November 11, 2021 at midnight. PRIZE DRAWS (From online entries): On or About December 3, 2021 **1 of 6 chances to win across Canada

NO PURCHASE IS NECESSARY TO ENTER OR WIN. A PURCHASE DOES NOT INCREASE THE CHANCES OF WINNING.

On-line - To be eligible to win one of the six (6) prizes in this sweepstakes, go to www.mycommunitycash.ca and fill out the entry form, complete the sweepstakes entry form, including the correct answer to the mathematical skill-testing question, select your home store from the participating Family Foods, Clover Farms and IFT stores listed in Schedule A to these Rules (each a “Participating Store”), and submit your entry. Only one entry submission per person per day will be accepted. Each entry must be submitted by an eligible entrant with a valid email address and connection to the Internet. To be eligible, all online entries must be received by midnight on, Thursday, November 11, 2021 the sweepstakes closing date.

REGIONAL PRIZING: For the purposes of this Contest the Participating Provinces will be split into the following three regions: (each a “Participating Region”):

There is a total of $33,000 in cash and prizes to be won. For each of the six (6) randomly selected winners who entered into the contest online at www.mycommunitycash.ca there will be a $500 shopping spree awarded to each the winner to spend at their ‘home store’* (6 x $500 = $3,000 total) and six (10) $5,000.00 Cash prizes ($30,000 total) will be donated to a local food bank (Sponsor to determine which food bank area) in winners name. Prizes must be accepted as awarded without substitution and are not transferable. Sobeys Wholesale and Sobeys Capital Incorporated (the “Sponsor”) reserves the right, in the event that a prize or a component of a prize cannot be awarded as described for any reason, to substitute a similar prize or component of equal or greater value without liability. Only one (1) prize per person or household.

* For the purposes of this Contest ‘Home Store’ will be defined as the Participating Store indicated on the entry form submission.

ELIGIBILITY: Contest entry is limited to residents of British Columbia, Alberta, Saskatchewan, Manitoba, Ontario, Newfoundland & Labrador, Nova Scotia, New Brunswick, Prince Edward Island, Yukon, North West Territories and Nunavut who have reached the age of majority in their province or territory of residence at the time of entry except employees (and those with whom such employees are domiciled) or agents of Sobeys Wholesale or Sobeys Capital Incorporated, “The Sponsors” or subsidiaries, parent companies, affiliates, franchisees, distributors, representatives, advertising and promotional agencies, agents, sponsors of Sobeys Wholesale or Sobeys Capital Incorporated., participating Family Foods, Clover Farms and IFT locations its advertising and promotion agencies, and the Sweepstakes judges.

DRAW AND WINNER SELECTION: On or around December 3, 2021 in Calgary, Alberta at approximately 2:00 pm (Mountain Standard Time), six (6) eligible entrants will be selected from the online entries by random draw from all eligible entries received during the Contest. You do not need to be in attendance to be selected. No correspondence will be entered into except with the selected entrants. This sweepstakes is void where prohibited by law and is subject to all applicable federal and municipal laws. By entering this sweepstakes, each entrant expressly consents to the Sponsor, its agents and/or representatives, storing, sharing and using the personal information submitted with his/her entry only for the purpose of administering the sweepstakes and in accordance with Sponsor’s Privacy Policy unless the entrant otherwise agrees. Winner will be notified by email and/or telephone within five (5) days following selection of Winner. The Sponsor, Sobeys Wholesale – Sobeys Capital Incorporated shall have no liability for Winner’s failure to receive notices due to spam, junk e-mail or other security settings or for Winner’s provision of incorrect or otherwise non-functioning contact information.

If the selected entrant cannot be contacted within fourteen (14) days of selection or there is a return of any prior notification as undeliverable, that entrant will be disqualified and an alternate entrant will be selected from among the remaining eligible entries. Also if the selected entrant does not return the completed waiver form within fourteen (14) days from the time that the sponsor sends it to them (via fax, courier or registered mail), the Sponsor reserves the right to randomly select a new eligible entrant.

ODDS:The odds of winning a Prize depends on the total number of eligible entries received in each respective region during the Contest Period.

ANY VIOLATION OF THESE OFFICIAL RULES BY WINNER (AT THE SPONSORS SOLE DISCRETION) WILL RESULT IN WINNER’S DISQUALIFICATION AS WINNER OF THE CAMPAIGN, AND ALL PRIVILEGES AS WINNER WILL BE IMMEDIATELY TERMINATED.

Only sweepstakes winners will be contacted. If an entrant is not contacted within the aforementioned time period, it means they have not been chosen as an eligible winner.

By entering, each winner consents to the use of his/her name, address (city and province) and/or photograph, likeness or voice in any and all forms of media, without further remuneration, in connection with any publicity carried out by or on behalf of the Sponsor(s) with respect to this Sweepstakes.

The Sponsor(s) and the independent Sweepstakes organization are not responsible for: (i) late- received, illegible, incomplete, falsified, destroyed, unintelligible, incomplete, lost, irretrievable or misdirected entries and all such entries are void (ii) entries which fail to comply with these Sweepstakes Rules. Entry materials/data that have been tampered with or altered are void. In the event it is determined that an entrant has entered or registered in a fashion not sanctioned by these rules and/or has submitted or registered more than the number of entries or registrations permitted by these rules, the entrant will be disqualified and all of the entries submitted by the entrant will be disqualified.

All entries become the permanent property of the Sponsor(s) and none will be returned. No correspondence will be entered into except with the selected entrants. This Sweepstakes is void where prohibited by law and is subject to all applicable federal, provincial and municipal laws.

The Sponsor(s) respects your right to privacy. By entering this Sweepstakes, each entrant expressly consents to the Sponsor(s), its agents and/or representatives storing, sharing and using the personal information submitted with his/her entry for the purpose of administering the Sweepstakes unless the entrant otherwise agrees to additional purposes.

This Promotion is in no way sponsored, endorsed or administered by, or associated with Facebook or any represented prize image brands or manufacturers. Any questions, comments or complaints regarding the Promotion shall be directed to the Sponsor.

All other Trade-marks are the property of their respective owners.

Disputes: THIS Campaign IS GOVERNED BY THE LAWS OF Canada AND the province of Alberta WITHOUT RESPECT TO CONFLICT OF LAW DOCTRINES. As a condition of participating in this Campaign, participant agrees that any and all disputes that cannot be resolved between the parties, and causes of action arising out of or connected with this Campaign, shall be resolved individually, without resort to any form of class action, exclusively before a court located in Alberta having jurisdiction. Further, in any such dispute, under no circumstances shall participant be permitted to obtain awards for, and hereby waives all rights to, punitive, incidental, or consequential damages, including reasonable attorney’s fees, other than participant’s actual out-of-pocket expenses (i.e. costs associated with entering this Campaign). Participant further waives all rights to have damages multiplied or increased.

By entering the Contest, and as a condition of acceptance of the Prize, you, your heirs, executors, administrators, legal person representatives, successors and assigns, agree, among other things, to hereby irrevocably and unconditionally release and forever discharge and hold harmless, Sobeys Wholesale and Sobeys Capital Incorporated, and each of their respective direct and indirect parent companies, affiliates, subsidiaries, successors, assigns, agents, advisors, franchisees, shareholders, partners, representatives, their advertising, promotion and fulfillment agencies and each of their respective employees, officers, directors, agents and representatives (collectively, the “Released Parties”), from and against any and all losses, damages (including, without limitation, direct, indirect, incidental, consequential or punitive damages), rights, claims, actions, causes of action, injuries, property damage or death, demands, liabilities, suits, obligations, duties, acts, omissions, misfeasance, malfeasance, losses, expenses, costs, rights of indemnity, and all other claims and rights whatsoever, including without limitation all costs and liabilities of any kind
including legal fees on a substantial indemnity scale, hereinafter called “Claims” and including without limitation any claims arising from any act of gross negligence of the Released Parties, that you now have, or may hereafter have against the Released Parties directly or indirectly resulting or arising from: (i) participation in the Contest, or the awarding, acceptance, possession, use, or misuse or enjoyment of any Prize, and where applicable, traveling to, preparing for, or participating in, any Contest-related or Prize-related event or activity; or (ii) the publicity rights granted to the Sponsor and the Administrator. You specifically acknowledge that you understand that there may be serious risks of bodily injury, death, or property damage associated with the acceptance, possession, use and/or misuse of the Prize and attendance at any event or participation in certain Prize-related activities, and you voluntarily assume these risks. You also agree to indemnify, defend, and hold harmless the Released Parties from any and all Claims in respect of the foregoing.

Winners List: To obtain a copy of the Winner’s names or a copy of these Official Rules, mail your request along with a stamped, self-addressed envelope to: Sobeys Wholesale 1020-64th Avenue N.E. Calgary, Alberta T2E 5V8. Requests must be received no later than December 30, 2021.

Sponsor: The Sponsor and Administrator of the Campaign is Sobeys Wholesale – Sobeys Capital Incorporated.
By checking that you have read the rules and regulations, You, the Sweepstakes entrant, have affirmatively reviewed, accepted, and agreed to all of the Official Rules above. 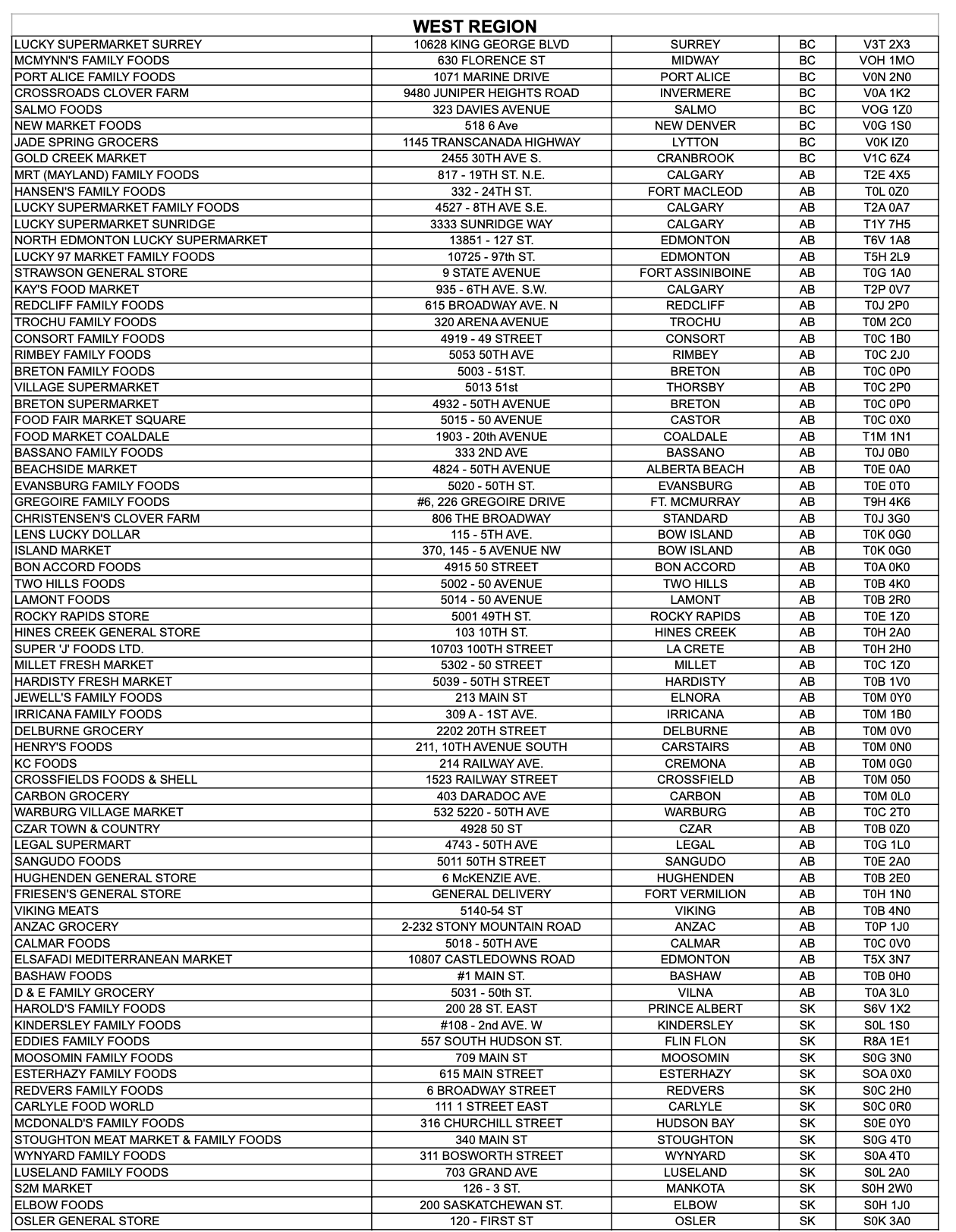 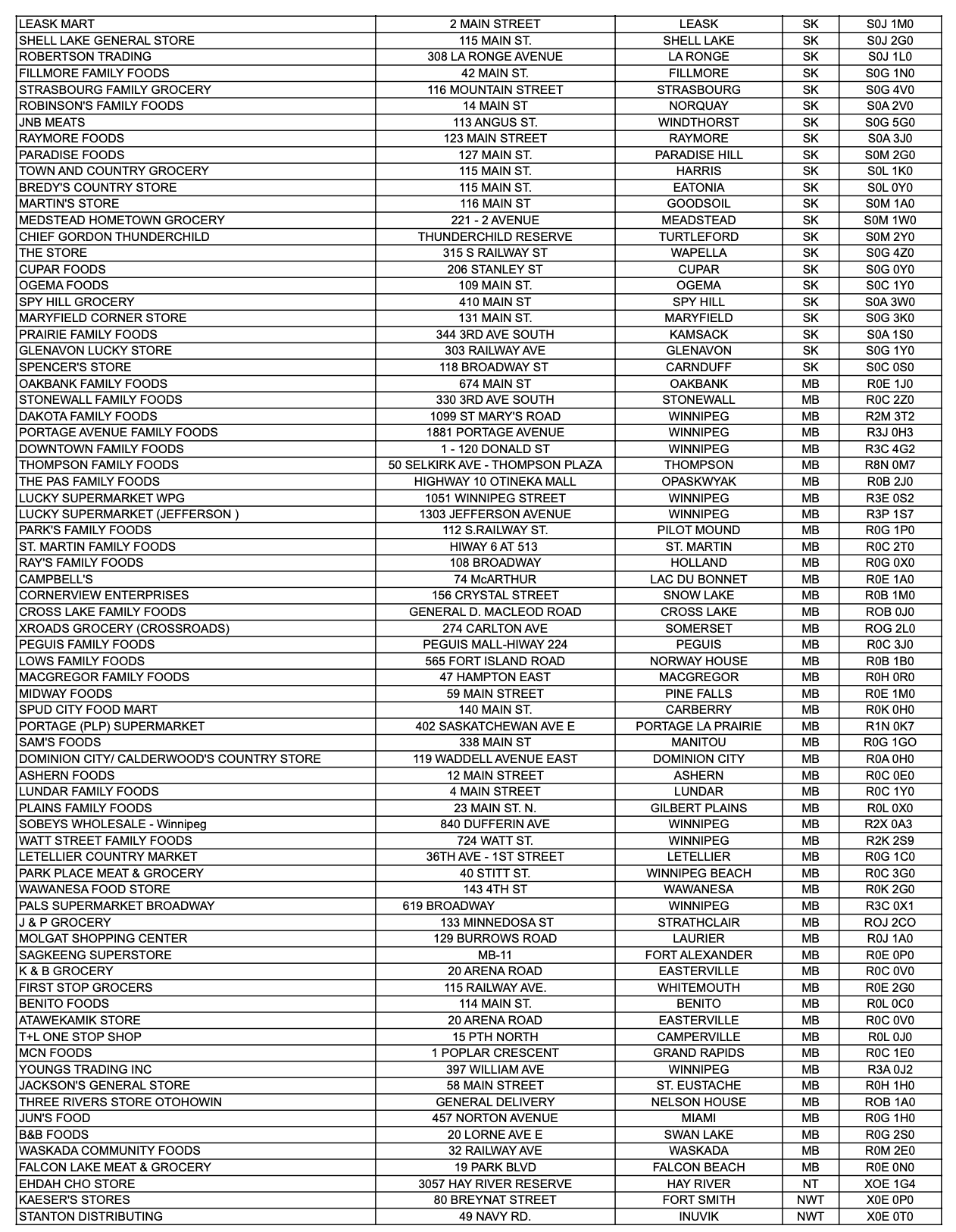 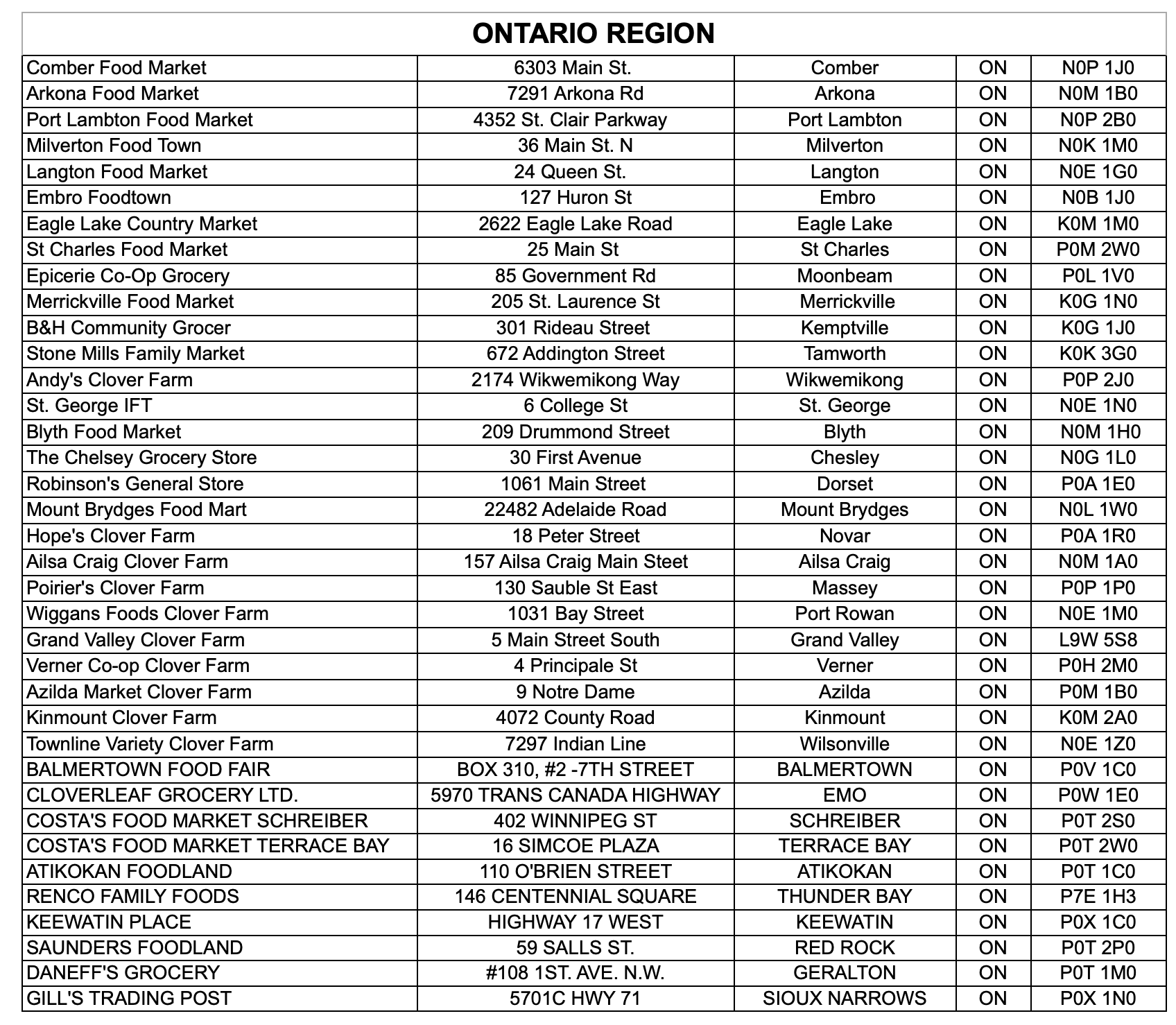 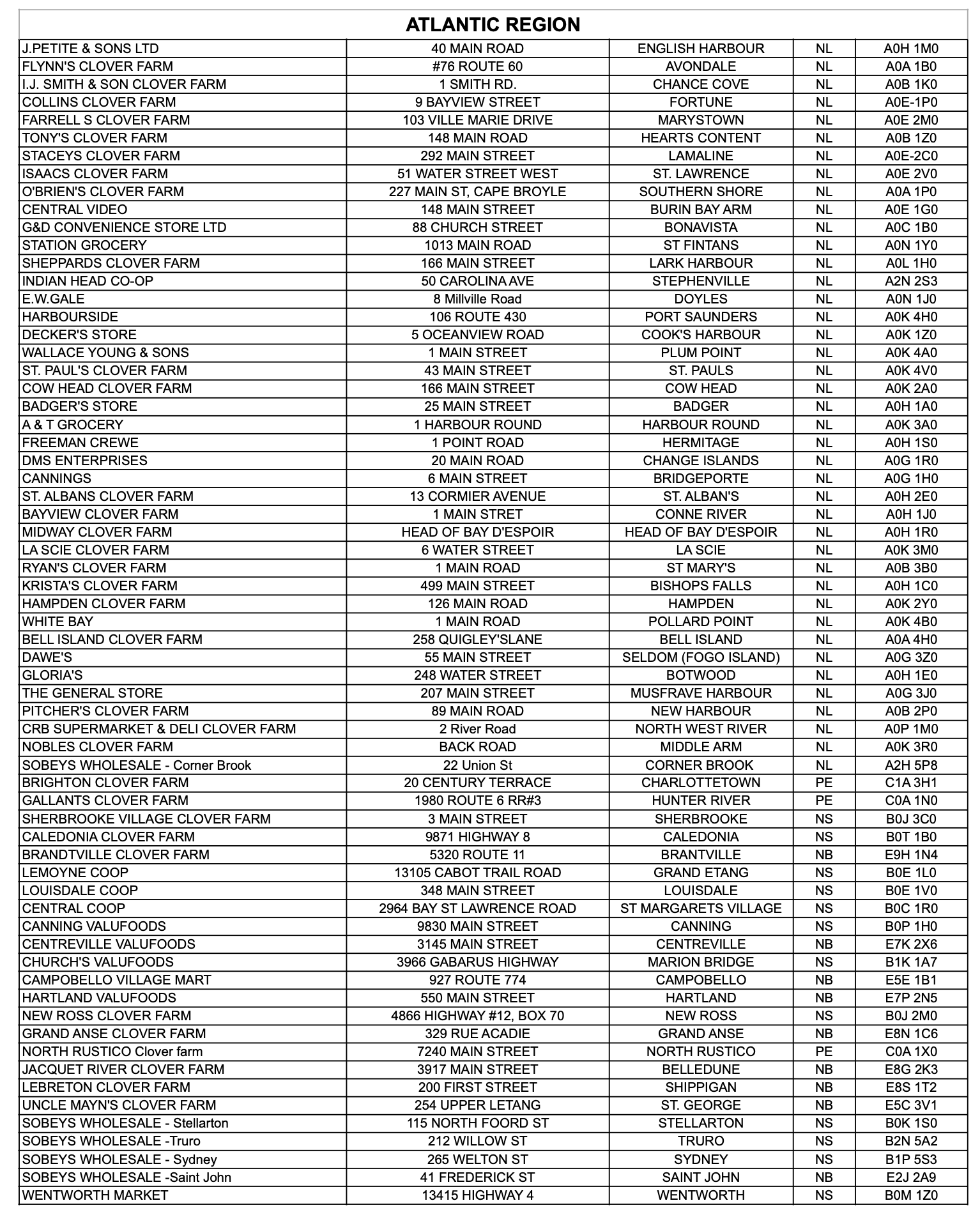